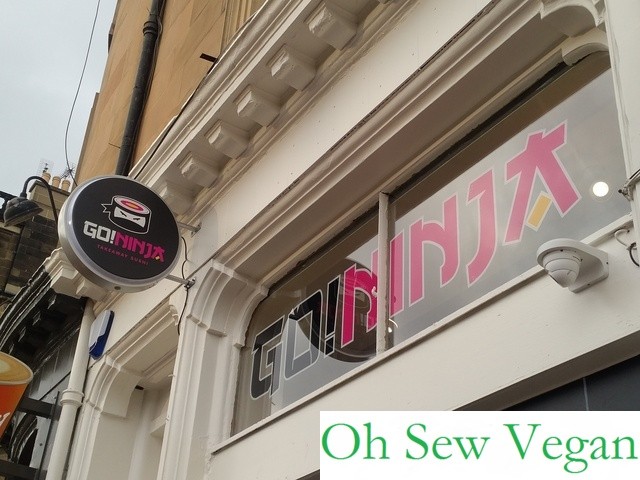 As a Chinese person, I love my Asian food. I’d been ordering vegan sushi platters almost every month from Minato Sushi (here) to get my sushi fix while visiting Vietnam House regularly (see my review here) for Vietnamese food in Edinburgh. When I discovered that Go! Ninja Sushi opened up in Haymarket and that half their menu was vegan-friendly, I was over the moon.

Disclaimer: My meal (excluding my drink) was offered in exchange for a blog post. All thoughts and opinions on Go! Ninja Sushi, however, are entirely my own. 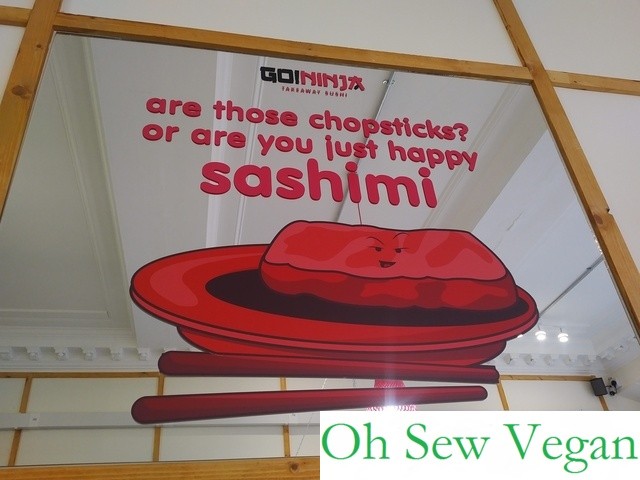 As a takeaway restaurant, there is a seating area for those who wish to dine in, but Go! Ninja Sushi is situated in a perfect location for staff in all the nearby businesses looking for a quick lunch. Like other takeaway stores like Pret A Manger, the food available is on display in their chilled cabinets and you pay for your purchases at the counter. 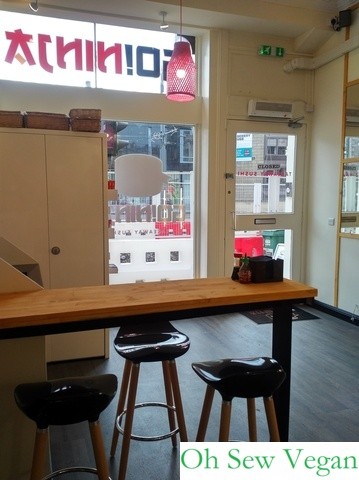 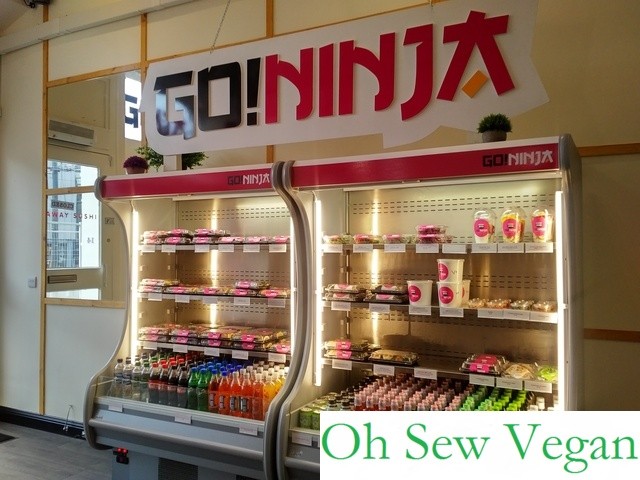 Speaking to Store Manager on duty, Gemma, I was excited to learn that half of their menu is already suitable for vegans! For those who are gluten-free, the Japanese mayo used in some of their sushi contains gluten, but if you contact them in advance (preferably 24 hours notice) to allow them preparation time, they will be able to make up sushi for you without the mayo.

Now for the exciting part, here’s all of their amazing vegan sushi! I’ve also had the privilege of speaking briefly with the chef who is interested in expanding the range of vegan sushi as long as there is demand for it. 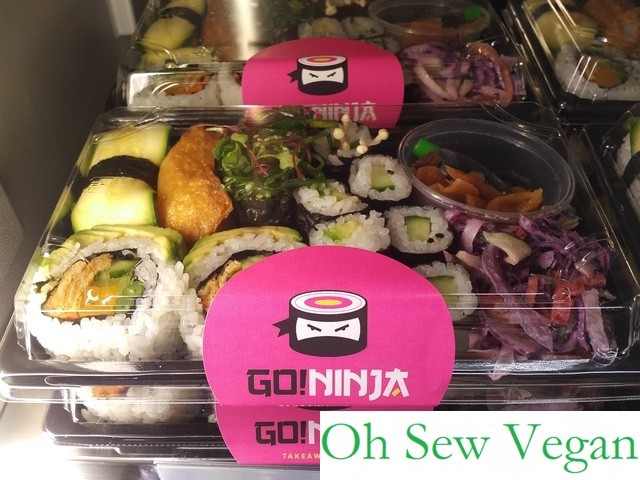 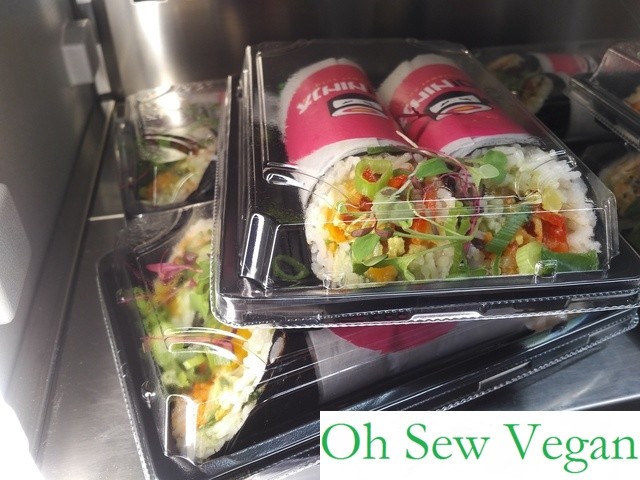 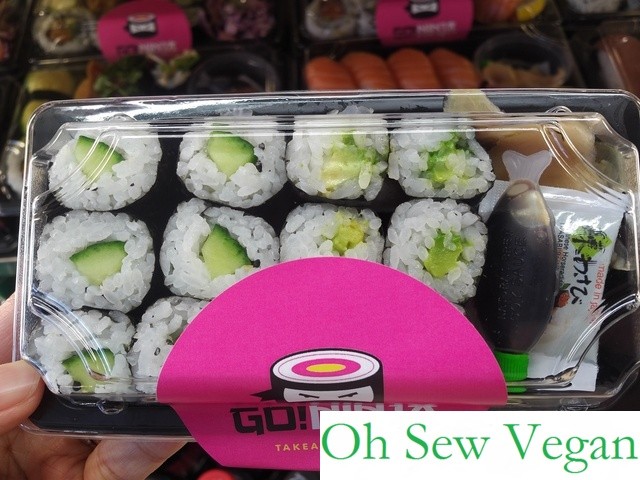 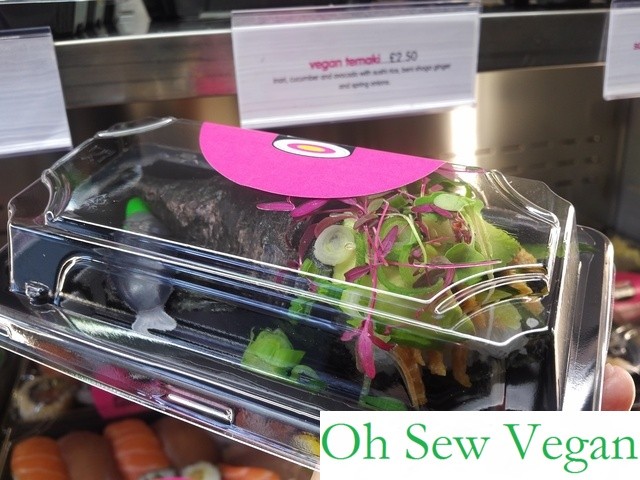 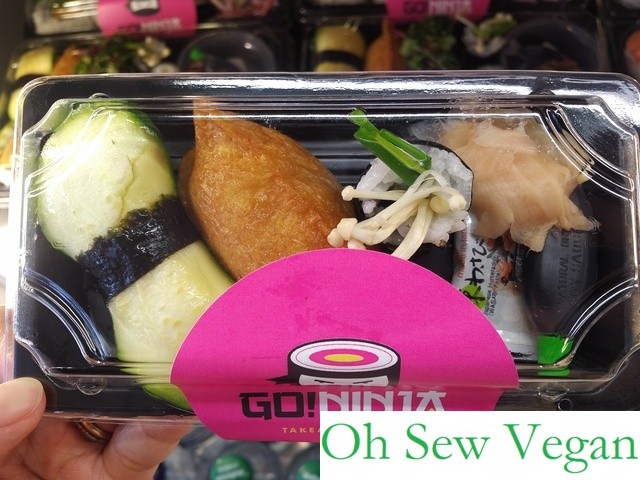 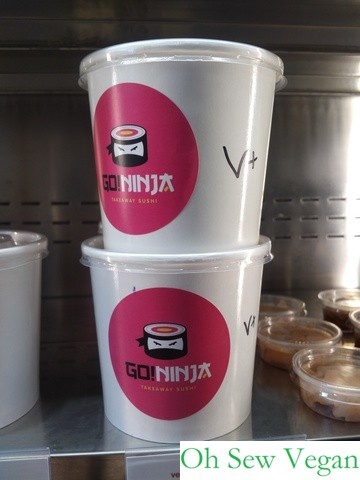 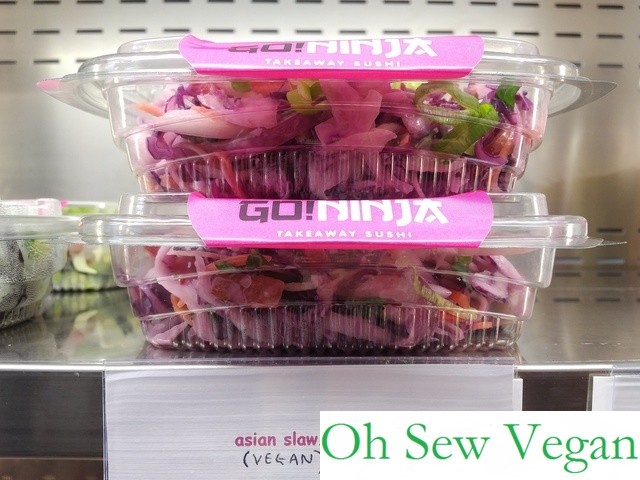 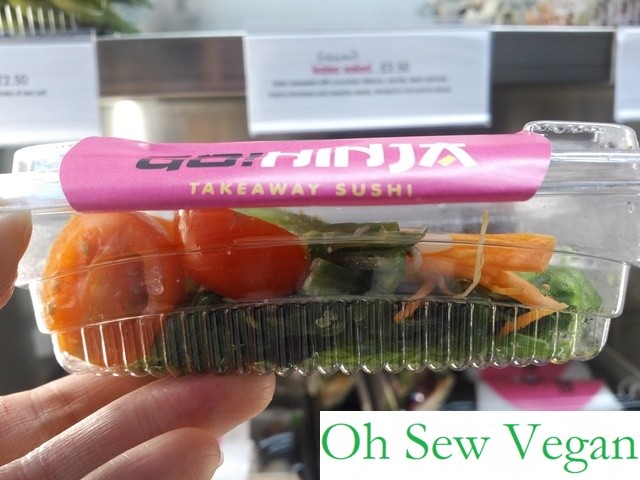 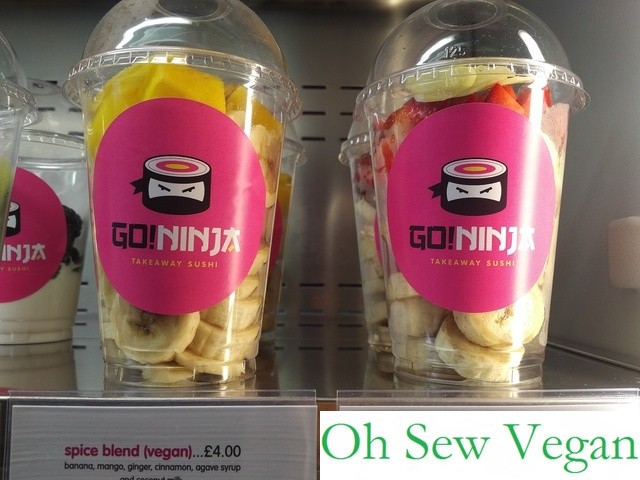 The best thing that really got me excited though was the range of Japanese ramune sodas they had in stock! Growing up, my siblings and I used to drink one of these every now and then, but back then they only ever really had lemon or peach flavours. It’s been a while since I’ve had one of these, probably not since I moved to Edinburgh, and it’s reminiscent of my childhood. The best part of these drinks is that after you’ve removed the safety stopper, you push the plastic lever (provided) down on to release the marble, but make sure you’ve got napkins on hand as it does fizz up and spill over from the fizzy gas being released! I’m not 100% certain about the Pokemon edition, but going through the ingredients list, the other bottles seem fine.

Of course, after taking photos of all the wonderful sushi that was on selection, I had to help myself to a bottle of the strawberry ramune to go with my Vegan Supreme sushi box and miso soup. 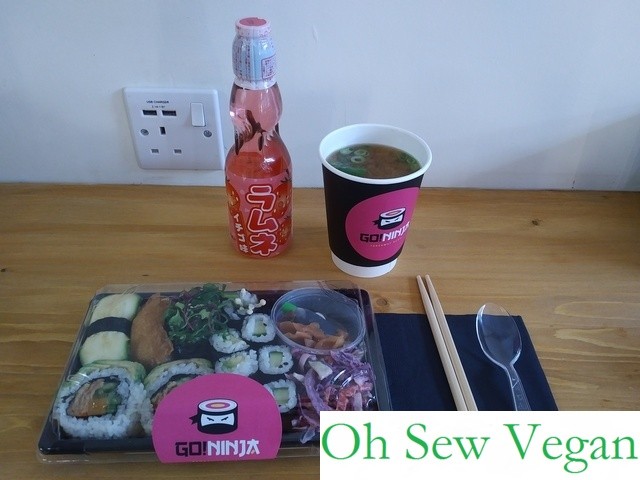 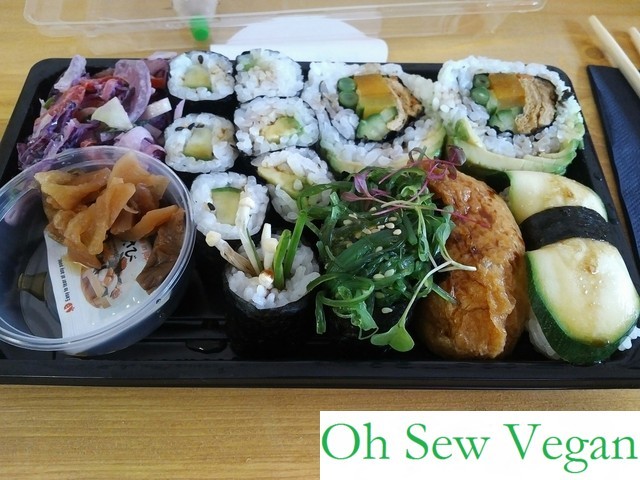 I’ve noticed that I can eat a lot of sushi and wasn’t sure whether I would still be hungry after eating this box, but it filled me up nicely and I thoroughly enjoyed the contrasting flavours of each sushi. The vegan dragon iso was lovely and I really liked seeing a vegan version similar to the non-vegan dragon roll. I also haven’t had enoki mushrooms in a while, so to have an enoki maki in there made me a very happy vegan.

The chef was also very kind and brought me over a coriander dip to try with my sushi. He explained that the dip would compliment the vegetables well and no joke, it really did! 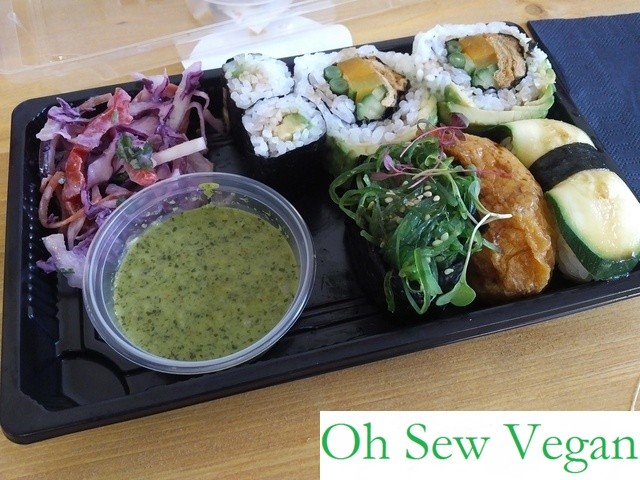 I’m very much stuck in my ways and while I’m not a big fan of ginger and wasabi that you normally get with your sushi, I’m a stickler for just having soy sauce on my sushi. I’m not sure what I was expecting, but the thought of coriander sauce seemed like it would be bland, but the chef really knew what he was doing with this. The coriander sauce was bursting full of flavour and had a slight hint of spices without being overpowering to give it a very unique taste. Even though I’d evenly distributed soy sauce on all my rolls, I pretty much cleaned out the sauce container to get the last drop of coriander sauce on my sushi rolls. 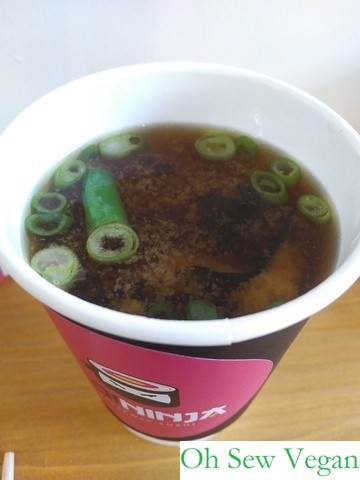 At just £2, you get quite a hearty serving of miso soup. I’ve had miso soup that have been a hit or a miss, but the miso soup hit just the right spot. I love the slight umami taste of miso with the texture of silken tofu and wakame. The spring onion pieces also gives the soup a bit of a kick giving it a nice combination of flavours. It’s been a while since I’ve been served good miso soup that’s also suitable for vegans and Go! Ninja Sushi has done well with their soup!

The Vegan Supreme box really filled me up more than I expected, so much so that I wasn’t all too famished when it was time for dinner. I enjoyed the miso soup and Ramune soda with it and felt like I really got a fully Asian sushi experience. If sushi isn’t to your liking, try the Veggie Pot although I have been told it’s quite spicy. If you’re also ordering for a team at your business nearby, please try to give them plenty of notice so that they can keep up with stocking the fridge for walk in customers while also catering to orders for lunch time.

Go! Ninja Sushi can be found at 14 Clifton Terrace, EH12 5DR opposite Haymarket tram and train stations and is open between 11:00am and 8:00pm Monday to Saturday (closed on Sunday). For more information and to contact the team, check out their Facebook page here.