I have a confession to make.

Since going vegan, I’ve heard some mixed reviews about where to get vegan pizza. Some have mentioned how the pizza bases weren’t vegan, how some places offer pizza without cheese and how some of the cheeses used weren’t quite as stretchy as you would expect from dairy cheeses. I’m sure you would avoid something too if it was potentially going to ruin your impression of what a good dish should taste like, so I’ve been avoiding pizzas…up until a couple of weeks ago.

When Emma from Vegan Edinburgh invited me to go along to review new pizza parlour, @pizza on Charlotte Lane, I had to give it a go. 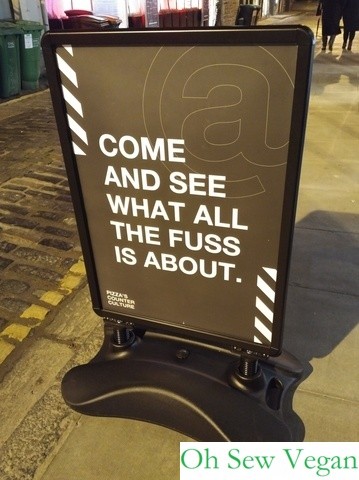 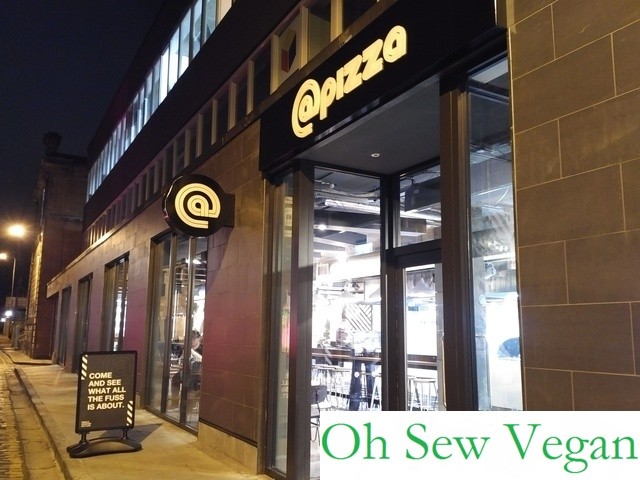 Pronounced ‘At Pizza’, this modern looking pizza parlour promises you great pizza with fresh and local ingredients, whether you choose from their a la carte menu or decide to customise your own, the price will remain the same. @pizza are always looking to work with local suppliers to support the local community to offer no fuss, no muss, straight-up good pizza in just 90 seconds. Yup, you heard it right. A pizza (even a customised one) that’s ready in a minute and a half!

The tables are well spaced out so that you don’t feel like you have to shout over each other to be heard, but at the same time offers enough tables to accommodate a good number of pizza-happy customers. The modern space keeps it minimalistic, focusing your attention on the food itself, and their taste bud-tingling menu. 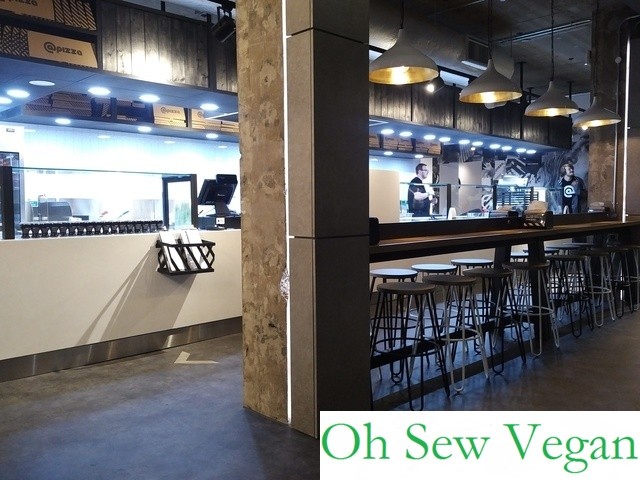 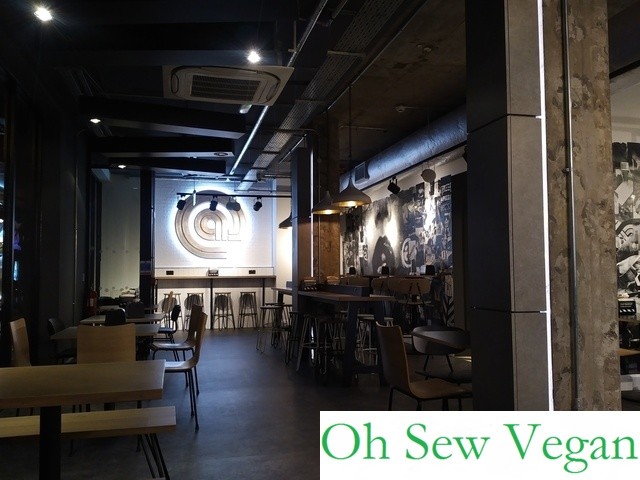 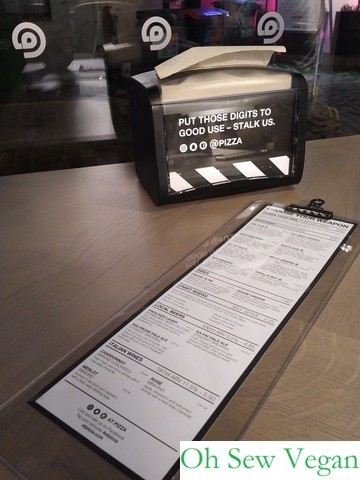 At first glance, none of the a la carte pizzas are vegan, but since each pizza is freshly made when ordered, it’s entirely possible to swap out non-vegan ingredients if you like the sound of any of the menu items. We decided to try our hand at customising our own pizzas instead.

From choosing between a sourdough or 100% ancient grain (has slightly less gluten although not gluten-free) base, to your sauce, main ingredients, it is then fired into the oven for a short while (I never took out my watch to check the time, but I imagine if someone were to time it on a stopwatch, it must live up to their 90 second claim to fame!) before any final toppings are added. 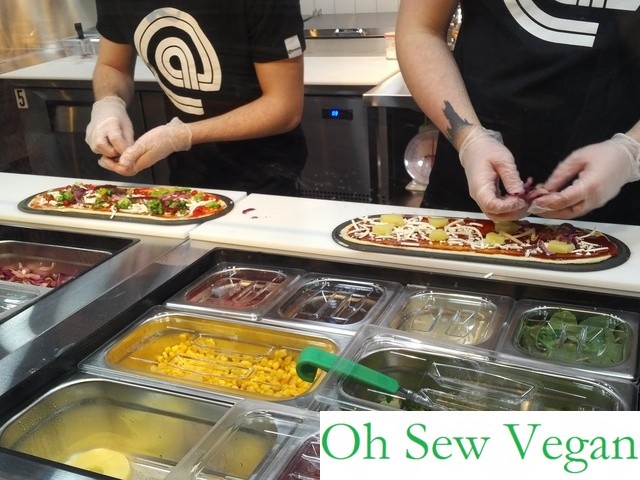 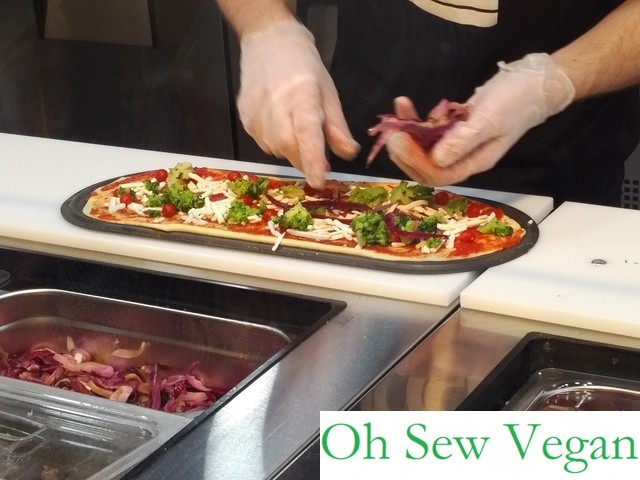 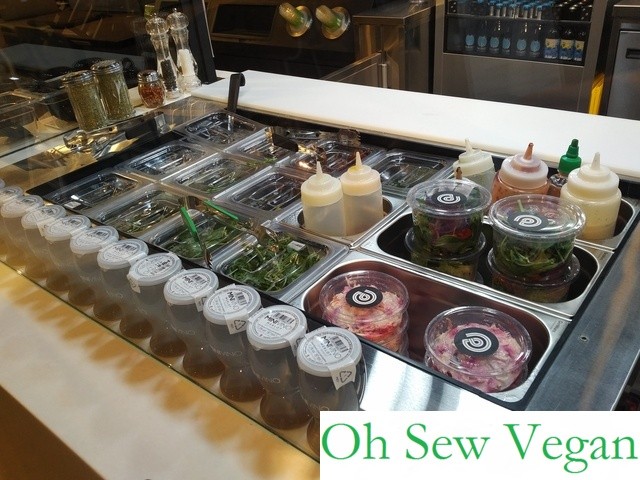 Not only can you bask in the wonder of creating your own pizza without breaking the bank or having to make the decision on whether it’s worth the extra cost (thank goodness for equal pricing, @pizza!), you can get free refills on all craft sodas which have been handcrafted especially for the store! Choose from yummy sounding flavours like Apple & Bramble, Sicilian Lemonade, Mango & Blood Orange or Ginger, Lime & Mint. 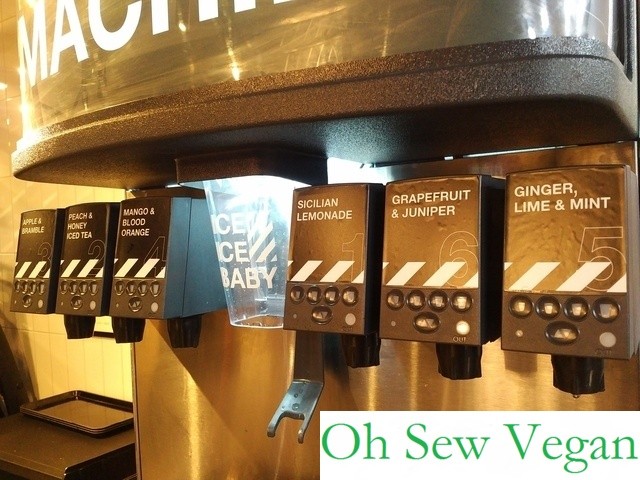 When our pizzas were ready, I wasn’t quite sure whether I would be able to eat the whole lot myself, but I made sure to leave plenty of tummy room for pizza, so I was game. Luckily I did as they are quite a generous size! 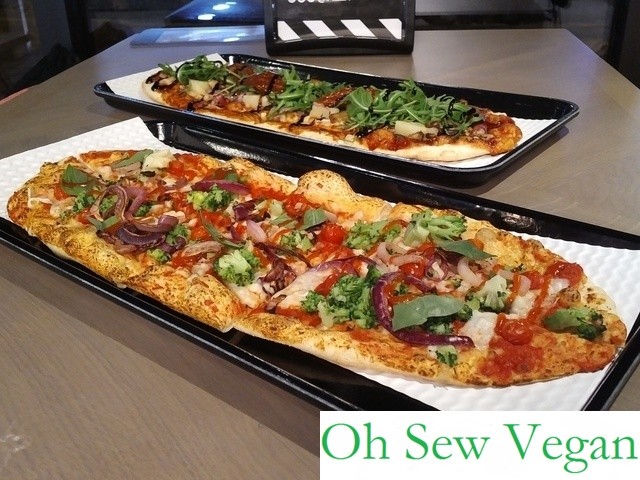 I ordered mine on an ancient grain base which was nice and crispy without feeling like I’m munching on crispy crackers. It hit the right spot with the right amount of soft chewy dough on a thin base. I decided to go completely mad with my pizza, although I did wonder if the flavours would all go well together once it’s done. I went with smoky barbecue sauce, Scottish vegan cheese (yes, even their vegan cheese is locally sourced!), mushrooms, red onions, pineapples (BBQ sauce and sweet pineapple chunks?) and finished it with sun-dried tomatoes, rocket and balsamic glaze. Getting the crazy part yet? 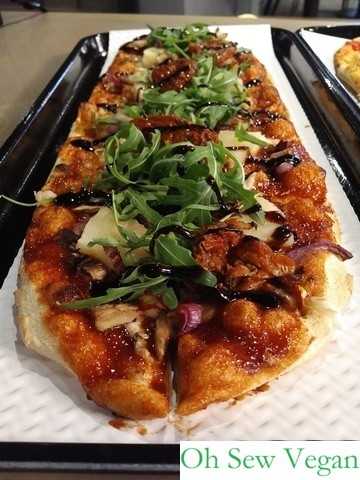 Compared to my overwhelming excitement at getting to try my first vegan pizza, Emma went with what’s probably a more rational choice (although she did spice things up) with her classic tomato sauce on an ancient grain base, topped with vegan cheese, broccoli, red onions, tinkerbell tomatoes finished with fresh basil and Sriracha chilli sauce. 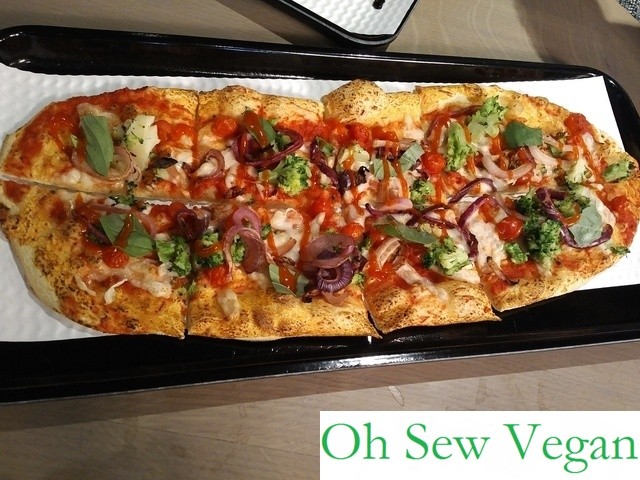 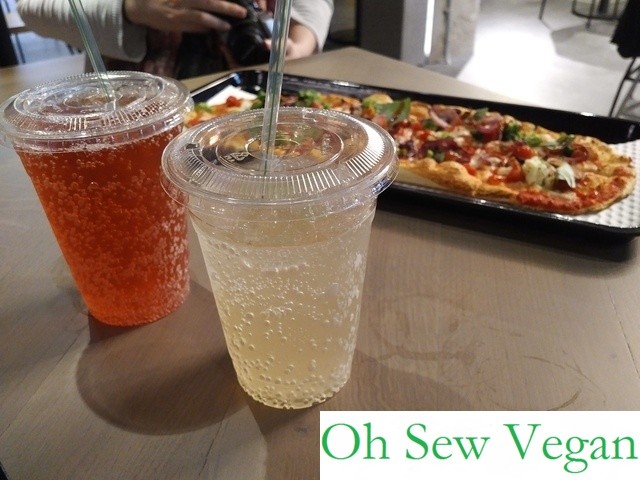 The pizzas were great and just went to prove with vegan food, you can mix and match the craziest ingredients ever (really, what was I thinking with smoky barbecue sauce with sun-dried tomatoes, rocket and pineapple?) but I actually really enjoyed it and somehow the flavours really came together. For the price you’re paying for artisan pizza and a soda, you’re not breaking the bank and would really work well with students and those on a budget. If you were to order a pizza and soda, it’ll only set you back £11.75 (more if you’re ordering a side – the House Green salad is vegan by default – and/or alcoholic drinks) when you’d be spending a lot more than this in a restaurant.

For the size of pizza we were served, I’m glad we left plenty of room and made sure to arrive hungry and didn’t eat too much beforehand. Out of all the pizzas I’ve had before I became vegan, I really have to say that @pizza has offered the best pizza I’ve ever tasted. I love the Scottish vegan cheese that’s just perfectly gooey while the 100% ancient grain base perfectly balances the ingredients without overfilling your stomach full of carbs.

This is my new favourite pizza parlour and recently I brought some friends back for lunch who I think would agree with me. One of them was even eager to try all 6 craft soda flavours to determine which one was his favourite!

@pizza can be found opposite Indigo Yard at Charlotte Lane, EH2 4QZ. Open daily between 12:00pm and 11:00pm, try out their revolutionary pizza counter culture for yourself. For bookings and enquiries, call 0131 285 5940 or e-mail them to say hello.

2 thoughts on “Speedy vegan pizza in 90 seconds! Review of @pizza in Edinburgh”