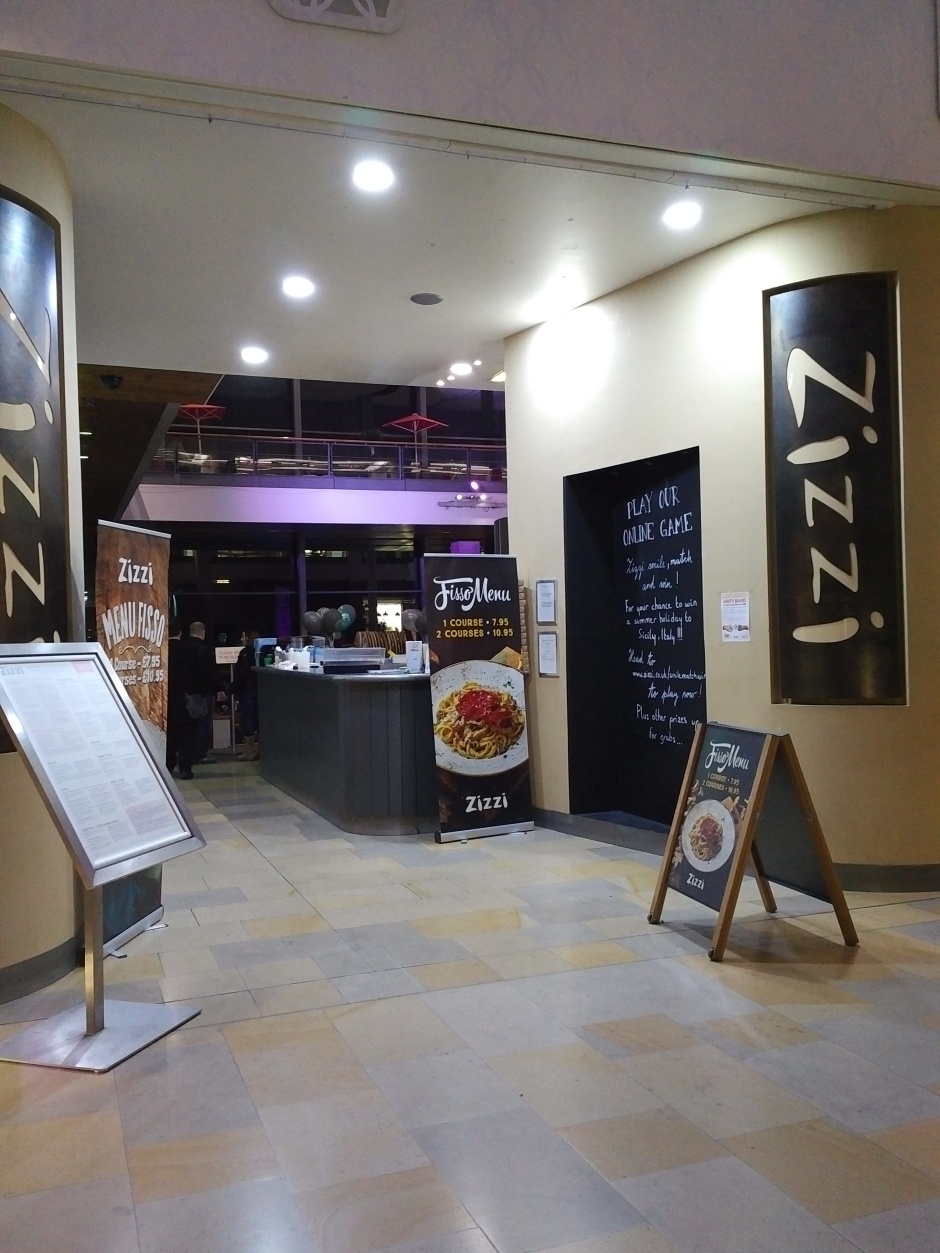 I’d reviewed and wrote a post about Italian chain restaurant Zizzi before I became vegan and I enjoyed my visit. On my most recent second visit, I’ve now experienced two different menus. Never would I have thought that my second visit, 2 years later, would be as a vegan, but there you go!

My first visit with the OH was to the branch at Queensferry Street and on this occasion, we went to the one at Ocean Terminal in Leith (there are also branches at The Quay and Roxburgh Court by Mary King’s Close). I’ve heard a lot of good things about Zizzi so when my mother-in-law suggested going out somewhere for dinner (as one of the only 2 vegans in the family – apart from my brother-in-law – we needed to go to a vegan-friendly omni restaurant), that was the first name that popped to mind.

The branch at Ocean Terminal is quite spacious and easily accessible by lift or escalator. It’s also not too heavily filled with tables so with the open space the restaurant is located in, it’s easy to talk without feeling like you need to shout across the table at each other to be heard.

Some of the items in the main menu are marked as vegetarian/vegan or can be made vegan, but Zizzi are clearly on the ball with catering to customers with dietary requirements and have a separate menu for us. In the dietary requirements menu, there is an allergen information table that clearly marks possible allergens or dishes that are suitable (or unsuitable) for those who may be vegan and gluten-free. Luckily for me, instead of browsing the main menu to find a lot of dishes weren’t suitable for vegans, I was one happy vegan when I discovered the vegan menu at the front of the dietary requirements menu which made it easier for me to decide which dishes I wanted to order without worrying about picking the wrong one!

To start, I’m not a big fan of olives so those were off the list for a starter course. I love garlic bread, but I was worried that it was going to be too filling and that I would be too full to eat my main course. The vegan garlic bread though is lovely thin pitta bread with roast garlic cloves, smoked garlic oil and rosemary. When the platter arrived, it was such a generous portion that I thought they’d given me garlic bread as a main by mistake! The thin pitta bread means it’s not heavy on the stomach though and the roasted garlic cloves were done so well, I hardly noticed I was biting into cloves. It had a nice, soft texture and the taste of garlic wasn’t overpowering. I enjoyed the slight salty grains with the taste of rosemary and smoked garlic oil.

The OH ordered the olives and even my mother-in-law who wasn’t a big fan of olives, enjoyed them very much. There were no pits found in these large-sized fruit and it wasn’t overwhelming with the flavour of brine either which meant you could enjoy the texture and taste of it more.

For the main course, I decided to go with the new winter special, vegan lentil ragu linguine with fresh oregano. Being a huge mushroom fan, I couldn’t resist adding an extra of field mushrooms. I had a bad first experience with lentils and apart from having some in Scotch broth, I’ve shied away from ordering any dishes with lentils, including dhal at Indian restaurants. I realise now that the lentils weren’t soaked for long enough or cooked properly by the chef at the time as it was quite crunchy. The lentils in the ragu though were very nice and I can happily say this is now one of my favourite pasta dishes (second to mushroom and garlic linguine).

After all that food, I wasn’t sure I would be able to fit in dessert, but I couldn’t help craving the idea of strawberry (my favourite fruit) sorbet. A lot of the time, you get a citrus sorbet on the menu, but I’ve a fruit intolerance to most citrus fruits and the other option while tempting was coconut gelato with chocolate swirls, and I’m not the biggest coconut fan so strawberry sorbet it was. It was so refreshing and genuinely tasted like strawberry (rather than artificial flavouring) that I was like a little girl eating ice cream for the first time. The OH tried some of my sorbet and enjoyed it so much, he took another big spoonful while I wasn’t looking!

I’m a creature of habit and once I find something I really like to eat, I’m more than likely going to be eating the same thing for a while. Zizzi has created a great vegan menu as well as a menu for those with dietary requirements that make me feel like valued a customer despite my dietary restrictions. I’m also very pleased with the fact that they offer vegan cheeses on their vegan menu. It’s one thing that a lot of omni restaurants stay away from as finding good vegan cheese can be hard, but from what I’ve heard from other vegans, Zizzi’s vegan cheeses are top-notch!

I’m really excited to come back for another visit soon, I’ve been assured by Zizzi on my Twitter account (see here) that there will be new exciting additions coming real soon to the vegan menu, so stay tuned!

To find the closest Zizzi branch in the UK and Ireland to you, click here.

If you’ve been to Zizzi, what’s your experience been like? Do you have a favourite dish?